SPOTLIGHT ON THE FCTC

The Spotlight on the FCTC are SFP briefing papers covering the most important articles of the Framework Convention on Tobacco Control (FCTC).

Friday, 30 January 2009
The fourth issue of the Spotlight on the FCTC focuses on the European Commission proposals to amend EU Directives on the rates and structure of taxes on manufactured cigarettes.

In July 2008 the European Commission published a proposal updating current EU rules on the taxation of tobacco products. In this edition of Spotlight, the SFP aims to explain the background to the proposals, the legislative procedure that will be followed at EU level and, most importantly, why tobacco taxation is one of the most effective and efficient methods to reduce smoking rates.

Smoking is still the biggest cause of preventable death in the EU, with 650,000 smoking-related deaths each year. The World Bank argues that, on economic grounds alone, tobacco should be controlled, and estimates that, when all costs of tobacco around the world are subtracted from all benefits, the net result is a global economic loss of US$200 billion each year. Furthermore, the cost to the EU of tobacco-related disease is estimated at €100 billion – 1% of the EU’s GDP, a sum almost equivalent to the entire EU budget.

Tobacco taxes are successful in reducing smoking levels as they:

Source: Howard Barnum, The economic burden of the global trade in tobacco, Tobacco control, 1994; European Commission, Tobacco or Health in the European Union: Past, Present and Future, Luxembourg, 2004 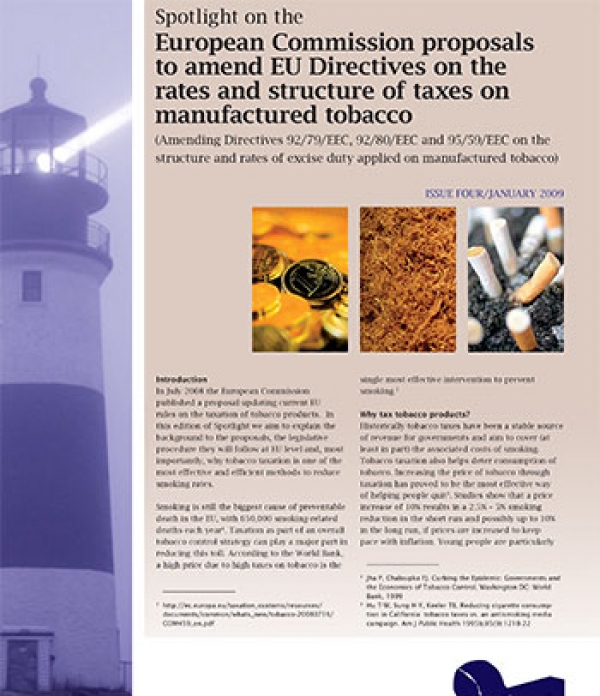