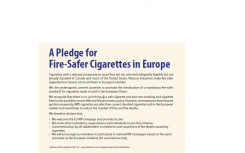 28 February 2007. A European campaign to ensure that only ’fire safer’ cigarettes are produced and marketed in the EU was launched at a hearing in the European Parliament.

A European campaign to ensure that only ’fire safer’ cigarettes are produced and marketed in the EU was launched at a hearing in the European Parliament on 28 February 2007. The event was hosted by Ms Arlene McCarthy, MEP and Chair of the EP Internal Market and Consumer Protection Committee, and opened by MEP Ms Catherine Sithler.

1. The next General Product Safety Directive meeting to discuss fire safer cigarettes is being held in June in Brussels. We need organisations at national level to write to their government before the meeting, asking them to support legislation on fire safer cigarettes.

2. Other Members of the European Parliament and representatives of EU organisations and associations are invited to join the EU RIP Alliance by signing the Pledge in the coming days, weeks and months.

4. In view of the fact that it is technologically and economically feasible for cigarettes to meet fire safety standards, the EU RIP Alliance aims to promote, in collaboration with other EU organisations such as the European Fire Safety Network and the RIP coalition in the UK, the introduction of reduced-ignition propensity cigarettes based on the same standard as in New York and Canada (ASTM International E2187).

5. Finally, a Parliamentary Declaration will be launched soon. We will need organisations to write to their MEPS to sign the Declaration in support of the introduction of fire safety standards for cigarettes.

Please note that the Dr Latarjet presentation contains images unsuitable for some readers.