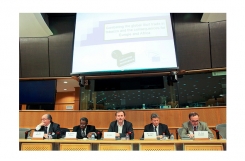 1 February 2010. The Smoke Free Partnership organised an seminar in the European Parliament in Brussels on the global illicit trade in tobacco.

The objective of the seminar was to provide an outline of the crucial discussions that will take place at the fourth Intergovernmental Negotiating Body meeting (INB4) in Geneva in March 2010, where the final negotiations will take place on the Illicit Trade Protocol, a subsidiary treaty to the Framework Convention on Tobacco Control (FCTC). There was a discussion as to how the EU can impact on the negotiations, with a special reference to the problems specific to Africa.

The fifth and sixth issues in the ‘Spotlight on the FCTC’ series, which cover tobacco and development policy and the illicit tobacco trade respectively, were launched.

The seminar brought together 70 participants including Members of the European Parliament, senior officials from the European Commission, representatives from the Member States, and public health and tobacco experts.

The event was hosted by Bart Staes MEP, Vice Chair of the European Parliament Committee on Budgetary Control.

Please see below for the full report plus speaker PowerPoint presentations.