Brussels, 11 June 2019 – More efforts are needed at European and national level to reinforce tobacco control policies and help reduce its disease and death toll, participants heard at an event marking WHO’s World No Tobacco Day in Brussels today. In 2019, the World No Tobacco Day focuses on tobacco and lung diseases to raise awareness of the impact of tobacco use on lung health. Tobacco smoking is responsible for two-thirds of lung cancer deaths globally, but also brings with itself a plethora of other issues such as chronic obstructive pulmonary disease, tuberculosis or reduced lung function.

The high level event and award ceremony in Brussels recalled the threat of the tobacco epidemic to the health of future generations and called for a renewed political commitment to eliminate tobacco use. It was jointly organised by WHO Regional Office for Europe together with three leading tobacco control organisations -- the European Network for Smoking and Tobacco Prevention (ENSP), the  European Respiratory Society (ERS), and Smoke Free Partnership (SFP), and supported by the European Cancer Leagues (ECL), the European Cancer Patient Coalition (ECPC) and the European Public Health Alliance (EPHA). Speakers included Mr. Arūnas Vinčiūnas (Head of Cabinet of European Commissioner for Health and Food Safety Vytenis Andriukaitis), Leen Meulenbergs (Director, Strategic Partnerships, WHO/Europe, and WHO Representative to the European Union), Kristina Mauer-Stender (Program Manager, Tobacco Control Program, WHO Regional Office for Europe), and an expert intervention by Dr. Filippos Filippidis (School of Public Health, Imperial College London, ERS Standing Committee on Tobacco Control).

The event looked at past achievements as well as future action needed. Participants at the meeting called for stronger policy action on tobacco in order to prevent lung diseases and improve overall public health. Policies include strong smoke free policies, the implementation of plain packaging and advertising restrictions at national level. Furthermore, the session’s participants called on the new political mandate of the European Parliament and Commission to include a strong, long-term commitment to tobacco control and the implementation of the Framework Convention on Tobacco Control (FCTC) in order to eradicate tobacco production and consumption.

During the award ceremony, the achievements of six organisations and individuals based in the European region, were recognised with the 2019 WHO World No Tobacco Day Award:

The session brought together public health organisations, experts in tobacco control, policy-makers from the international, European and national levels, with the goal of making a first step towards a renewed commitment to tobacco control.

Kristina Mauer-Stender, Program Manager, Tobacco Control Program, WHO Regional Office for Europe: ‘We know that 90% of lung cancers could be avoided by eliminating tobacco use. There is a huge potential to improve health by implementing policies that we know are effective, such as increasing taxation, using plain packaging, banning advertising and eliminating exposure to second-hand smoke. Without countries taking action, we will miss the opportunity to use tobacco control as a major lever for improving public health.  The latest tobacco trends report from WHO reveals some key opportunities for action, for example addressing tobacco control in countries where women have not yet started to smoke.’

Arūnas Vinčiūnas, Head of Cabinet of the European Commissioner for Health and Food safety, said:  ‘This year’s event highlights the devastating effects of tobacco smoke on lung health. Lung health is the key part here. E-cigs, vaping and other ways to get an alien substance into the lungs are not healthy, pure air is. All these products should be sold only for smokers, as a tool to quit smoking, but not to young generation, who just want to have fun. And destroy their lungs unintentionally.’

Thierry Troosters, European Respiratory Society President elect, said: ‘The  lungs  are created  to  breathe clean  air. Every breath counts and a breath of smoked air is a breath wasted… when we breathe tobacco smoke hundreds of toxins damage our lungs.  Our focus must be on the prevention and elimination of tobacco use via all the WHO FCTC (World Health Organisation Framework Convention on Tobacco Control) measures which are proven effective. We have a duty to prevent children and adolescents from starting but we must also never give up on smokers. Smoking cessation efforts must be continually boosted. Let us not get side-tracked with new products that offer “reduced levels of toxins and  carcinogens” and “alternative ways” to become addicted to nicotine.’

Dr. Francisco Rodriguez Lozano, President, European Network for Smoking and Tobacco Prevention said:  ‘This year, the focus of WNTD is on "tobacco and lung health" because lungs play a fundamental role for the health and the well-being of all people. It is proven that all forms of tobacco have negative effect on people's lung health, from cancer to chronic respiratory disease. Smoking is not a choice, is an addiction, is a disease!’

Anca Toma Friedlaender, Smoke Free Partnership Director said:  ‘Every year, the WHO World No Tobacco Day reminds us of how far we got in eliminating the tobacco epidemic. Every year, it reminds us how of much there still is to do to prevent future generations from this deadly product. We know what works to end tobacco: the Framework Convention on Tobacco Control. We know what doesn’t work: allowing the tobacco industry to undermine public health. As the tobacco industry attempts new stunts, policy-makers should beware the wolf in sheep’s clothing.’

Professor Dr Galina Sakharova, Chief Researcher, Central Research Institute for Organization and Informatization of Health Care, Ministry of Health of the Russian Federation, said: ‘The WHO award is a sign of high appreciation of Russia's actions in the field of tobacco control. The award will provide new opportunities for public speaking in the media for me and my colleagues. It also will increase the credibility of our opinion and speeches.’

Shira Kislev, Chief Executive Officer, Smoke-Free Israel – the national initiative to eradicate smoking, State of Israel, said: ‘During the past two years, Israel has made important progress in closing regulatory gaps in the field of  tobacco and smoking. The award by the World Health Organization recognizes the wise path taken by Israel and provides support for struggling with the enormous challenges which we face. As the tobacco market reinvents itself, we need courage to take steps towards groundbreaking policy in a changing world.‘

Gergana Geshanova, Coordinator, Smoke-Free Life Coalition, Republic of Bulgaria, said on behalf of the organisation: ‘Tobacco Control is not the most attractive topic to people, neither to policy - makers, nor to researchers and medical professionals, however, it is key for the welfare of a nation, even more so for a small country as Bulgaria, and with such a high smoking prevalence. I hope that this award will demonstrate that the effort we put in tobacco control does matter and is recognized and appreciated worldwide by such high authorities as WHO. Hopefully this will engage even more people in the issues of tobacco control and together we could rally towards the common objective – to uproot the tobacco epidemic.’

Floris Italianer, Chair of Board, Dutch Alliance for a Smoke-Free Society, said on behalf of the organisation: ‘This award is a testimonial to all individuals and organisations who are contributing to realising a Smoke-Free Generation in the Netherlands; on behalf of the next generation, we are very grateful to them. The award supports us in continuing on the path we have chosen. We will keep attracting crucial stakeholders and accelerating the social movement that has taken off. So that children can grow up free from exposure to second-hand smoke and the temptation to start smoking.’

Urška Erklavec, President, No Excuse Slovenia – Youth Network, said on behalf of the organisation: ‘WNTD award is in the first place a confirmation of our efforts so far and a great motivator for our activists to continue our projects in schools, mystery shopping projects, and to advocate for higher prices of tobacco products in Slovenia. Despite a very good tobacco policy in Slovenia, we need to stay alert since the tobacco industry is always finding new ways to promote smoking to young people, or to systematically break the law if there is no control. We see the WNTD award as a privilege as well as a responsibility to be the tobacco industry "watchdogs" and strong advocates of tobacco-free society in the future.’

World Health Organisation Regional Office for Europe: WHO is the authority responsible for public health within the United Nations system. The WHO Regional Office for Europe (WHO/Europe) is one of WHO’s six regional offices around the world. It serves the WHO European Region, which comprises 53 countries, covering a vast geographical region from the Atlantic to the Pacific oceans. WHO/Europe staff are public health, scientific and technical experts, based in the main office in Copenhagen, Denmark, in 3 technical centres and in country offices in 29 Member States. http://www.euro.who.int/en/about-us

The European Network for Smoking and Tobacco Prevention (ENSP) is an international non-profit organisation, created in 1997 under Belgium law (identification number 16377/97). ENSP’s mission is to develop a strategy for co-ordinated action among organisations active in tobacco control in Europe by sharing information and experience and through co-ordinated activities and joint projects. ENSP aims to create greater coherence among smoking prevention activities and to promote comprehensive tobacco control policies at both national and European levels. http://ensp.network/

The European Respiratory Society (ERS) is an international organisation that brings together physicians, healthcare professionals, scientists and other experts working in respiratory medicine. It is one of the leading medical organisations in the respiratory field, with a growing membership representing over 140 countries worldwide. Its mission is to promote lung health in order to alleviate suffering from disease and drive standards for respiratory medicine globally. www.ersnet.org

The Smoke Free Partnership (SFP) is a coalition of NGOs working exclusively on EU policy analysis and advocacy linked to the implementation of the Framework Convention on Tobacco Control. Since its creation in 2006, SFP has helped lead campaigns on a number of important EU tobacco control policy areas, including smoke-free policies, the EU Tobacco Tax Directive, FCTC Article 5.3 Guidelines, FCTC Article 6 Guidelines, and the revised Tobacco Products Directive. The World Health Organisation recognised the SFP for its tobacco control work by awarding it a World No Tobacco Day Award in 2011. SFP was also awarded the 2015 Luther L. Terry Award for outstanding global achievement and exemplary leadership in Tobacco Control. https://smokefreepartnership.eu/ 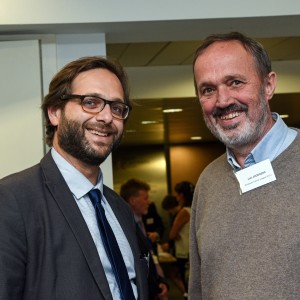 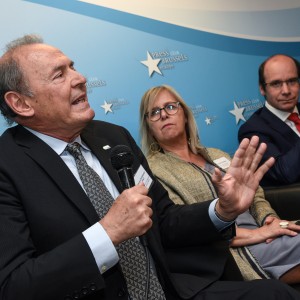 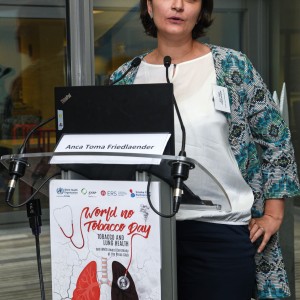 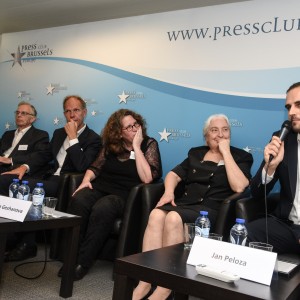 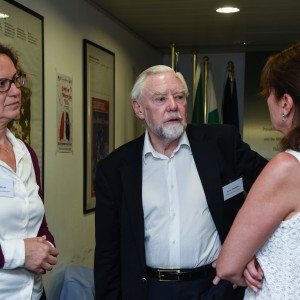 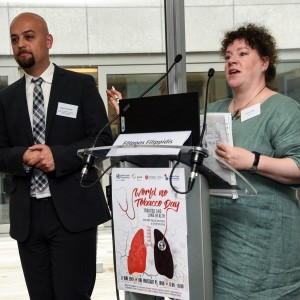 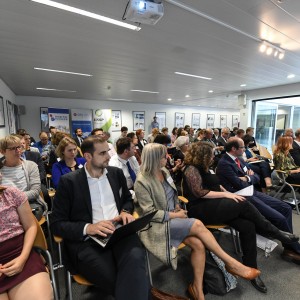 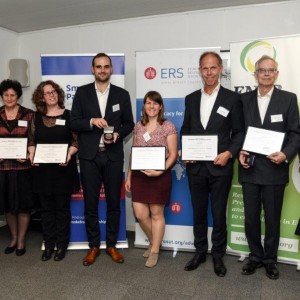 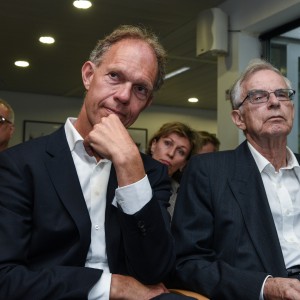 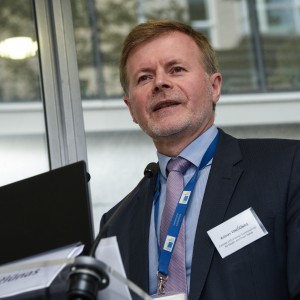 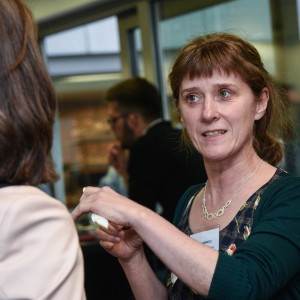 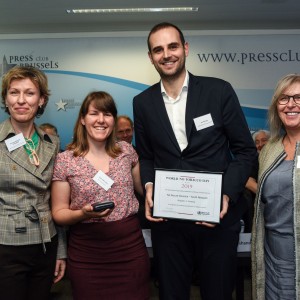