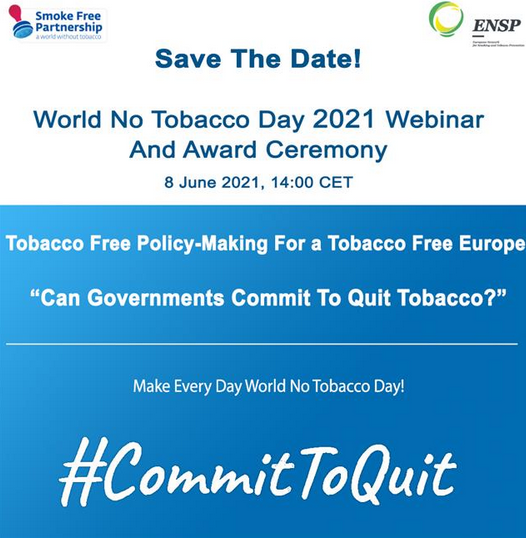 The Smoke Free Partnership and the European Network for Smoking and Tobacco Prevention with the support of the World Health Organization Regional Office for Europe hosted a World No Tobacco Day 2021 conference on 8 June 2021 (14:00 CET). The conference “Tobacco free policy-making for a tobacco free Europe” focused on exposing, discussing, and counteracting tobacco industry efforts against tobacco control progress.

The first part of the event featured a high-level panel discussion between experts, advocates and policymakers who discussed tobacco industry interference tactics and ways in which policymakers and advocates in different countries have counteracted them. It also addressed the industry’s attempts to take advantage of the COVID-19 epidemic in the past year to whitewash its reputation and to re-gain a seat at the policy-making table.

The second part of the event consisted of a virtual award ceremony facilitated by WHO EURO, to honour and recognise the European recipients of the 2021 WHO World No Tobacco Day Award:

The agenda is available for download below. The recording is available on the ENSP YouTube channel here (also embedded below).